New York, NY — In a new national television ad  released today, Mike Bloomberg speaks directly to voters “as an American who is deeply concerned with the direction of our nation” and urges them to vote Democratic in Tuesday’s midterm elections.

In the ad, Bloomberg addresses the recent mass shootings and pipe bombs and says, “Political violence tears at the heart of our democracy. And violence against a religious group, in a house of God, tears at the heart of our humanity. At these moments of great national tragedy, we look to Washington to lead… we expect a plan. We expect to be called to a higher purpose. We expect to work together. I don’t hear that call coming from Washington these days. Do you? 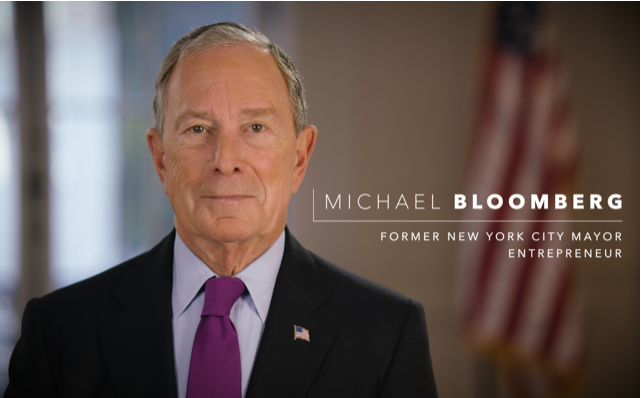 “Sadly, our greatest threats today can be found from within our borders, from a government that is constantly on the verge of shutting down over partisan bickering, that is accumulating record debt, and failing to address our most urgent problems,” Bloomberg says.

Bloomberg closes the ad stating, “At this moment, we must send a signal to Republicans in Washington that they have failed to lead, failed to find solutions, and failed to bring us together.  That’s why I’m voting Democratic. America is the greatest nation on earth and for all our sakes we must start becoming the UNITED States of America once again.” The ad debuts on national television during the Sunday, November 4th episode of CBS’ “60 Minutes” and will run nationally on CNN, MSNBC and major broadcast television networks through Monday, November 5th. It is the latest ad funded by Independence USA PAC, and the latest piece of a larger Get Out the Vote effort supported by Mike Bloomberg that began on Labor Day.

In a statement about the ad, Mike Bloomberg said: “The country is deeply divided. The president and Republicans are fueling that division, and that holds us back as a nation. I’m unwilling to sit by and accept it. After the president’s divisive response to last week’s attacks against people for their religion, race and political views, I just felt that someone had to stand up and say what I believe most Americans are thinking: We need our leaders in Washington to start bringing the country together and start working together to solve problems. That’s so basic. But Republicans in Congress have refused to do it. And they have refused to renounce the ugly attacks and fear-mongering coming out of the White House, particularly on immigration. The only way that’s going to change is if we hold them accountable at the ballot box, and that’s a big reason why I’m supporting Democrats around the country.”

To download the spot and corresponding assets please visit: https://www.independenceusapac.org/CampaignDetails/higherpurpose/

To view the ad on YouTube please visit: https://youtu.be/bliVbebfOHw

Independence USA PAC is a Mike Bloomberg-funded effort to support candidates and referenda in local, state and federal races across the country, with a focus on issues including gun laws, the environment and education policy. To learn more about Independence USA PAC, visit  https://www.independenceusapac.org/ .